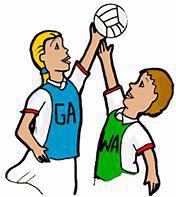 We run a Netball High 5’s club for both girls and boys in Year 5 and 6 from September to March on Wednesdays.  Term 1 runs from 3.30-5.00pm and the other 3 terms from 3.30-4.30pm. In addition, in term 6 we also run Netball club for Year 4 and 5 from 3.30-5.00pm in order to teach players some basics of the game before September. Currently the club is run by Mrs Johnson (our Finance Officer) who is assisted by Mrs Marriage and sometimes other parent helpers.

Netball is a popular growing sport and is a fun, fast and skilful team game. We teach High 5 netball at primary level because players have to rotate positions regularly and this encourages versatility and flexibility. In club we teach a variety of different drills to enhance fitness and netball skills, followed by game play to put into practice what has been learnt. Regular competitive matches and tournaments are organised against other local schools and players are selected according to their level of skill and experience. We have had excellent results in our inter-school matches and Stocks Green has won or been Runners Up in both the local Kent School Games tournament and a smaller tournament for our local collaboration of schools several times in recent years.